Disclosure: Some links on this page pay us a commission. First and foremost, however, these links are here because they may be helpful for your research. The commission is an extra benefit for us, because that provides funds for us to maintain this free website. Clicking on these links does not obligate you to buy anything. The choice to buy something is entirely yours.

Family trees can sometimes give you hints as to where to search for your ancestors. These hints, however, should not always be accepted as facts. It is always good to find records to support the information you find in familty trees.

This search example describes a hint I found at a family record site. In the birth records search example, I mentioned that my great aunt had told me that the maiden name for my second great-grandmother was Delilah Hall. In the late 1970s, I was able to find Delilah with her husband and children, but was unable to find anything about Delilah before she was married. A transcription ot the 1880 U. S. Census for the family from Gallia County, Ohio is shown below.

Clarinda is a misspelling of Corinda, my great-grandmother. The Burns family moved after the 1880 Census and I was not able to find them. In the late 1970s and early 1980s, it was much harder to search for census records. It involved scanning through microfilm rolls. I stopped researching my genealogy around the mid-1980s. I just wasn't making any progress.

The Computerized Ancestor website let me see all the records a given researcher has submitted. I clicked on that link and found a Sarah Ann Burns married in Minnesota. I knew that my great-grandmother Corinda Burns lived and died in Minnesota and in the 1880 Census. Maybe the family moved to Minnesota.

In the 1880 Census, Corinda's sister Anna should be born in 1871-1872. This matches, but the birth location is Virginia and not West Virginia. Nevertheless, my great-grandmother Corinda Burns somehow made it to the Moorhead, Minnesota area. This Sarah Ann is the right age and in Minnesota.

I looked through all the records Researcher MTC submitted. There was only one other Cummins in the researcher's records in addition to Delilah Cummins:

This George Cummins was born at a time that could have made him Delilah Cummins' father. Since this was the only other Cummins from this researcher, I thought I would tentatively start building a family tree from this data.

I continued to look through the records Researcher MTC submitted. There was only one other Hall in addition to Sarah Ann Hall shown above:

This John Hall was born at a time that could have made him Sarah Ann Hall's father.

Putting these records together created this tentative family tree:

Now, I needed to prove that this is correct. I knew that Corinda was born in Mason County, West Virginia. Assuming her father's name was Mathew Theodore Burns and not Theodore Burns as I previous thought, I found this 1870 U. S. Census record from Mason County:

This is difficult to read. The head of household is Burns, Mathew T. The second entry is Delilah.Corinda is in the third entry with an age of 4, which makes her birth year about 1866. This varies with the 1880 Census. Sarah Ann or Anna would not have been born in 1870.

I was in communication with another researcher who had found this marriage record for Theodore Burns and Delilah Cummins: 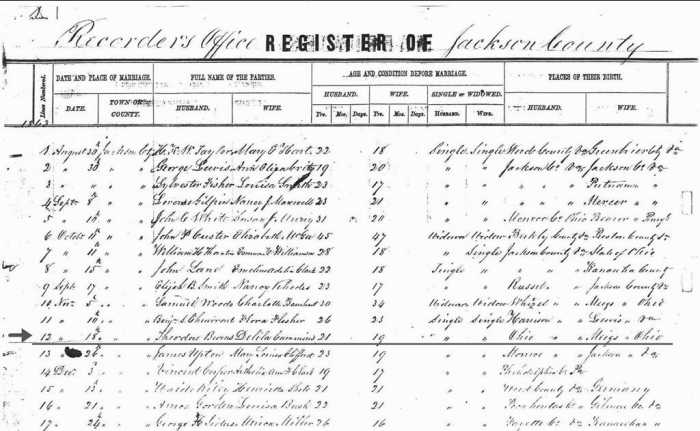 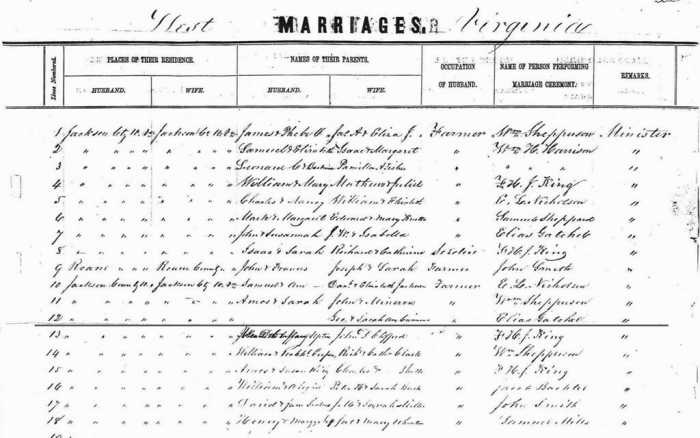 The underlined entry above shows that Delilah Cummins parents are George and Sarah Ann Cummins.

Moving up the tree, I searched for George Cummins and found this 1850 U. S. Census record from Meigs County, Ohio:

Before 1850, census records did not list family members. I found an 1820 U. S. Census record for John Hall in Meigs County, Ohio. It just could not be used to validate the tentative family tree. So, instead I looked into Sarah Hayhurst. The name Hayhurst seemed unique. I found two references on the Hayhurst family.

Pioneer History of Meigs County by Stillman Carter Larkin, pp 171-172:?John Hall and his wife, Sarah Hall, nee Hahurst, came from Pennsylvania and settled on a tract of land in Letart township about the mouth of Old Town creek, known as Ohio river bottom land, in the year 1811. Mrs. Hall was reared by Quaker parents. They were industrious and thrifty and cleared for cultivation their large farm. They had a large family of sons and daughters.

A Hayhurst Genealogy by Janice E. Shriver Sharps, pg 61:?Sarah Hayhurst born 28 Jan 1782 in Harford Co, MD, moved to Washington Co, PA with her parents and siblings. There she married John Hall out of meeting and was disowned. She and John moved down into OH along the Ohio River until they came to what is now Meigs Co, just across the river from Pt. Pleasant, WV. There they bought property and farmed. He died in 1824, leaving her with a young family. She continued to live and farm the property with the help of her family for forty-four years, never married again. She died on 5 Oct 1868. They were buried in a private cemetery on the farm near her father James.?

The tentative family tree I created from Researcher MTC records at The Computerized Ancestor appeared to be accurate. Note that the second reference above documents the birth of Sarah Ann Hall and also documents the Hayhurst family back to colonial times.

I then found Mathew Theodore and Delilah in California in the 1910 U. S. Census living with their son George. With the use of the California Death Index, I obtained death records for Mathew Theodore and Delilah. Delilah's death record listed her father as Geo. Cummings and her mother as Sarah Ann Hall. This matches the tentative family tree above. So, it appeared that my great aunt had merged two people when she said that Delilah's maiden name was Delilah Hall. Her maiden name was Delilah Cummings and her mother's maiden name was Sarah Ann Hall. (Family stories are obviously not always accurate.)

I also found Sarah Ann (Burns) Mellot in California in the 1910 U. S. Census living with her daughter Pearl. She was listed as Anna Mellott. The 1930 U.S. Census listed her as Sarah A. Mellott. With the use of the California Death Index, I obtained her death record. It listed her parents as Mathew T. Burns and Delilah Cummings. This confirmed that Sarah Ann is the Anna in the 1880 U. S. Census shown at the beginning of this example.

Getting this hint from family tree records at The Computerized Ancestor opened up a whole line of research for me. I have been able to trace some of Sarah Ann Hall's ancestors back to colonial times.

If you are not sure that searching for a family tree is the next best option for your research, consider using the advice feature of this site. This will help you pick your next best steps in your research. Go to the Free Search Advisor.

As a side note, I am currently hosting The Computerized Ancestor. That was not the case back in the 1990s when I found Mathew Theodore and Delilah. By 2011, the website was no longer available. Given that it had been critical to expanding my genealogical research, I tracked down the owner of the data and offered to host the website. The images above are from my version of The Computerized Ancestor, since the original is no longer available and I wanted to recreate my search as an example. My version added links to census records. Those links were not available with the original, because the census records were not online at the time. The Computerized Ancestor is not a large site, but for me it had unique data that I had not found anywhere else at the time.